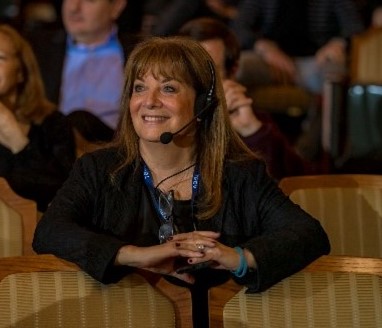 Genie Benson has been with Teev Events since 1996.  Since joining the team, she has worked on many projects and tours with David through the years including the production of Israel 60 at the Kodak Theatre, Save A Child’s Heart galas at CSUN and UCLA, and all local Los Angeles shows with Teev artists. She has built national tours for Teev’s Israeli artists and has become an integral part of the Teev operation.

Genie is also the Executive Director of the Keshet Chaim Dance Ensemble. For 37 years, Keshet Chaim, an Israeli contemporary dance company, has entertained audiences around the world. Drawing from the timeless themes of Jewish culture, they have been praised for their originality and inspiring performances. Through educational residencies, Keshet has created excitement and curiosity about Israeli culture, and they continue to break-down barriers of difference through dance.

Genie’s connection to Teev originally came through Keshet Chaim. As the dance group began to incorporate Israeli singers into their programs, she met David and for many years collaborated with his artists for their LA productions. Eventually this led to a partnership. With her years of experience with Keshet, and her relationships within the LA community, Genie continues to be an invaluable asset to Teev.