The band is considered by many to be Israel’s most important and influential rock band. Their musical style took inspiration from ska and hard rock, among others.

Mashina was formed by singer Yuval Banai, a member of the Banai family, probably Israel’s best-known family of entertainers; father Yossi was an actor and singer, as are uncles Gabri and Ya’akov, along with most of Yuval’s cousins. During his army service he met guitar player Shlomi Bracha and the two started playing music together. A friend of theirs, a recent Russian immigrant, suggested they call their band “Mashina Vremeni”, which means “time machine” in Russian (this suggestion may have been inspired by the well-known Russian rock band Mashina Vremeni of the 60’s and 70’s).

After their military service the two split up; Banai formed the band “Shlom Ha-Tzibur” (“Public Safety”), while Bracha teamed up with bassist Michael Benson to form the band “HaChazit Ha’amamit” (“The National Front”). In 1984 they decide to combine to form a new band, which they called Mashina, bringing in drummer Igi Dayan; in 1985, they released their self-titled debut, which quickly became a hit on the Israeli charts. Later Avner Hodorov joined the band on keyboard and saxophone. They gained widespread popularity in Israel during the late 80’s and early 90’s.

The musical growth of Mashina can be mapped to different influences across their albums. Their early sound was obviously imitative of ska bands like Madness; they didn’t bother to hide the influence, titling what became one of their earliest hit songs “Rakevet Laila Le-Kahir” (“Night Train to Cairo”), an homage to Madness’ “Night Boat to Cairo”, or “Geveret Sarah Hashchena” (“Miss Sarah, the Neighbor”) that copied the theme, music and opening lyrics of Bob Dylan’s “The Hurricane”. Their subsequent albums combined reggae, punk rock and Middle Eastern elements. “Ha’Amuta Le-Heker Hatmuta” (“The Society for the Study of Mortality”) sounds influenced by The Cure, “Miflatzot Ha-Tehila” (“The Monsters of Fame”) sounds influenced by The Pixies, “Si Ha-Regesh” (“Emotional Peak”) has the blues influence of Pink Floyd, and “Lehitra’ot Ne’urim Shalom Ahava” (“Goodbye Youth, Hello Love”) has the anthemic quality of U2.

Their lyrics tend to be cynical, sometimes humorously so. There are common themes of alienation, the struggle of everyday life and a desire for some sort of physical or spiritual escape. Mashina has gone on several North American tours, playing in cities including Philadelphia, New York, Boston, Toronto, Washington and Los Angeles.

In the Israeli Version of “The Voice” TV Show, Mashina members Yuval Banai and Shlomi Bracha acted as one coach during the 2nd season (2012-2013).

In the past year Mashina has been celebrating 30 years of rock and roll in a sold out tour around Israel, coming now to the USA .

Mashina is an Israeli pop rock band which is considered by many to be Israel's most important and influential rock band to date. The band was formed in 1984 by singer Yuval Banai, a member of the prestigious Banai family, Israel's widely celebrated family of entertainers. Mashina’s unique sound has been influenced by many well-known Western artists although their subsequent albums combined reggae, punk rock and Middle Eastern elements, creating a sound that is very unique and very Israeli.  Their first, self-titled album, Mashina, released in 1986, was an instant, overnight success, turning platinumin under 6 months. During that same year, Mashina wrapped up the final show on their national tour in front of 50,000 people in the Yarkon Park in Tel-Aviv. In 1989 the band released the album “Ladies and Gentlemen; Mashina”. The album was a colossal success, turning gold in less than 3 months and Mashina was name Band of the Year and their song “Rikud Hamechona” (“The Dance of The Machine”) was named Song of the Year.

Mashina has been working, performing and touring together on and off for since the 80’s.  In 2003, after a long hiatus, they decided to reunite and announced their new tour which was a huge, sold-out success.  At the tour’s finale, they released a live album which hit gold status in only a few weeks.  The band has also gone on several North American tours, playing at sold out stadiums in Philadelphia, New York, Boston, Toronto, Washington and Los Angeles. Band members include: Avner Hodorov – Keyboards, Iggy Dayan – Drums, Michael Benson – Bass, Shlomi Bracha - Electric Guitar, Yuval Banai – Vocals.  Special guest: Yael Dekelbaum 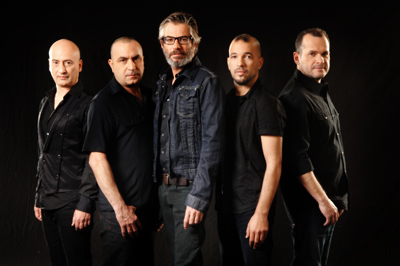